So what is it with the debate on making a difference for the environment? There seems to be a divide in that about half of the engagers in the debate want all of us to take more personal responsibility, while the other half has faith in that the government should and will solve the problem. These two opinions are of course both right and is more a reflection of one’s position on government vs individual responsibility. There is, however, in this time of polarisation several interesting projects focusing on a middle ground. In Sweden, the recycling rates are in general quite high, including recycling of newspapers, cardboard, plastic, glass, metal, batteries and electronics. The initial systems for recycling were based on centralised locations, to which the people brought their recyclable goods. This workes well for reaching most of the population, but requires people to actively recycle. To lower the tonnage that ends up in the non-recyclable rest and eventually incinerated, multiple municipalities have introduced a system with multi-tray bins, where the inhabitants can recycle in their homes. This means that the barrier of resistance to recycling is significantly lowered and at the same time the collection of recyclables can be combined with collection of the non-recyclable rest. The drawback is, of course, the need for specialised garbage trucks that can handle the 8-10 different fractions.

So this all comes across as a good idea, but does it work in practice? In the municipality of Malmö, the new bins were introduced in May and the switch was completed in the entire municipality in October. During the same period, the amount of non-recyclable rest was reduced by almost 50%, showing a clear increase in recycling in the municipality [1]. This is quite an amazing improvement from an already low level and quite tellingly show what we can do when the government aligns with the inhabitants and lower the barriers for making the right choice. 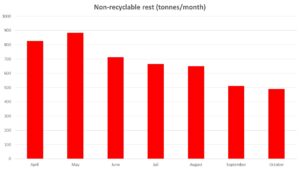